We’re at the end, class!

I’m not dying, or anything. But I promised myself at the beginning of this that I wouldn’t push this blog too far. I wouldn’t let it be one of those blogs that posted a lot at once, tapered off into a few posts a year, and died out from age or boredom. (If anyone thinks to look back at the posting dates of each one of my posts, you’ll notice a remarkable consistency.)

Which means there’s a finale to this saga. I read and reviewed the 50 Books to Read Before You Die, according to a bookmark. Just a few final remarks, and that’s all, folks.

I liked most of them. I loved many of them. There were a few I couldn’t stand, and I’m getting rid of those (to leave room on my bookshelf for better books). They all left an impression . . . they all gave me something to think about, something to chew on. Reading each one gave me a world to explore or a new perspective to consider. That’s what books are for.

Several of them gave me clues about how to be a better writer. This list is full to the brim of storytelling techniques, fascinating characters, and hilarious puns. I think all the great storytellers and artists copy from the greats, and this list featured some of the greatest stories of all time—so I’ve got a storytelling repertoire that will continue to inspire before I expire.

I keep coming back to why I chose to do this, and there’s one very obvious answer. I’d just graduated college. I loved college, and more importantly, I loved going to class. I love reading books and then talking about them. We just read this amazing chapter in this book I love, I can’t miss class! The professor’s going to break it apart, show me the little pieces that I missed—then I’ll love it even more!! That’s me. So what’s a man to do after graduation, when there are no more classes, no more professors, no more books and discussions? He starts a blog, of course.

I did this because I’d done nothing but read the assigned reading for the past four years. I wanted to dare myself into reading “literature” on my own. This was my way of making a real life class for myself, a series of self-assigned readings that any professor of a grade-A-geek would be proud of. And I did it for myself—not to show off my limited knowledge to people that know me, but to make myself better as a reader, writer, and storyteller, through the magic of the internet.

But I don’t stoop to think that this almost-three-year task made me a better person. I didn’t expect it would, because a better reader/writer/storyteller is not a better person. (If that sounds like too obvious a statement, I can assure you, that’s something I had to learn, and it’s something several fully grown adults still don’t know.)

It’s like the difference between living and reading about living. Some writers will tell you that the story is all that matters, but that only applies to stories, not to life. Stories serve many purposes—relief, connection, understanding, entertainment, discovery, motivation—but the one thing a story can’t do is replace living. Stories are reflections of life, and so is everything from history to art, from the greatest movie ever to a good joke. The reflections take us where we cannot go, far and wide around the Earth, back in time and forward to the future, and life still waits for us when we return.

No, this didn’t make me a better person. I learned a lot, though. If I use all I learned to not only tell better stories, but live a better life, then I’ll become a better person, I hope. That’s why the blogging is done, at least for now—I’m done with this chapter of my life-book, and if I stick around for too long, I might not get to the rest.

So keep reading. Then go live with what you learned.

Off-Topic: Definitive Ranking of All 50 Books

I love making lists. Ever since I started this blog I’ve been anxious to put the list of “50 Books to Read Before You Die” in order, from least favorite all the way up to favorite. I had to read them all first—so here’s a three-years-long dream coming true. I’ve read Every. Single. One.

To be honest, I paid more attention to the very least favorite and the top ten. The middle-ranked books got organized with a little less scrutiny. But I really can’t stand Martin Amis’ Money: A Suicide Note so it’s at the bottom. I wish I could unread it.

Yes, of course Ulysses is my top pick. I know it’s certainly not everyone’s favorite, I know it’s one of my several biases . . . but I love it anyway.

After writing this list out, I looked back at some of my older posts—looks like I condemned ranking books a few times, making my list here a bit hypocritical. Well, maybe a person can’t compare one book to another in a hierarchical system like this . . . I may pick Ulysses as my favorite, but I can’t just pick it up and read it for fun the same way I can with a Harry Potter book. And, to be fair, while I picked Ulysses for the way it changed my perspective as a reader, and for the way it portrayed love and humanity, it’s not like Harry Potter didn’t do that for me first.

If I have a point, I guess it’s that a book’s meaning to you as a reader will constantly change—and that there are as many books as there are people, and as many complicated feelings about stories as there are relationships.

I’ve got one more blog post planned—I want to share some of my personal reflections about reading all 50 books. Then you can all graduate from Prof. Jeffrey’s class. 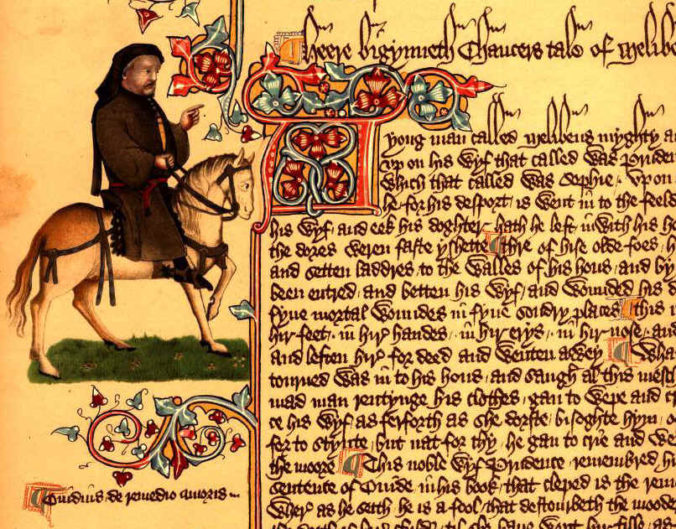 In college, back when I was a student (just like you!), I took a class called Chaucer and Medieval Literature—over half of our class time was dedicated to The Canterbury Tales. Chaucer only completed 22 of the “tales,” which is about one-fifth of the full-length compilation he planned to write. That class was hard enough as it was, so I can’t imagine it multiplied by five.

But I liked studying The Canterbury Tales (sometimes more than reading it). It’s intricate, boundary-breaking, and foundational for just about every major piece of literature after it. It’s actually comparable to the Bible—for all it’s culturally-insensitive flaws, it is one of the building blocks of modern literature.

Just make sure someone’s there to help you understand it, like a professor. A real professor. Not a blogger. And please, just avoid the Middle English if you know what’s good for you.

The Canterbury Tales is about a lot of stuff, but it’s mostly about telling stories. A group of pilgrims are journeying to Canterbury, and they tell each other stories to pass the time—whoever tells the best story wins the competition. It’s a little mundane, but the stories they tell are diverse and multifaceted. Many of the tales are crude, especially those that use rape as a comic plot device. It’s always hard to look past. But a handful of these stories are, simply put, good. My favorites are the Wife of Bath’s Tale, the Pardoner’s Tale, and the Nun’s Priest’s Tale.

The Wife of Bath’s Tale is one of the most feminist things medieval literature has to offer—it even holds up well today. After a knight’s rape of a girl, his punishment is to go out and find what women want most. A woman he meets claims to know the answer, but he must give her something in return—he must marry her. He agrees, but instantly regrets it because of her age and poverty. But she proves to him what she claims women want: sovereignty—power over men, which men consistently have over women. She gives him a choice between two options, neither of which he wants, so he tells her to decide, which she wanted all along.

The Pardoner’s Tale is probably my favorite—when I read it in high school, I recognized it instantly as the inspiration for “The Tale of the Three Brothers” in the Harry Potter franchise. Three men set out to conquer Death, and they come across a treasure that they won’t share. They each end up killing each other out of greed, and Death takes each of them without hesitation.

The Nun’s Priest’s Tale is probably the most genuinely enjoyable of the tales—it’s about a talking rooster who has a dream about his eminent death by a fox. He is convinced that it’s a sign, but his hen convinces him otherwise. He goes about his business, and when a fox actually does catch him, the rooster outsmarts the fox and escapes, making for a happy ending.

There are a lot of good high school English reasons to read The Canterbury Tales. Historical context, frame story, character study, themes and symbols…I can already see the unit plan. It’s just a good piece of literature to study.

But I like to think there’s a good reason to read it, in the same way one would read any other book on the 50-books list. As luck would have it, my previous book provides the answer—Life of Pi by Yann Martel. The climax of Life of Pi involves the choice between two stories, and which one is “better.” That’s the crux of the competition in The Canterbury Tales—choosing the best story.

This isn’t the kind of story you read on a Saturday curled up in a comfy chair…it’s the kind of story that you study and slave over. But it proves that big, important literature is on the same level as your comfy-chair-book. The Canterbury Tales is a big, epic-scale piece of literature about the importance of stories. Stories guide us and nurture us, and they reach out to us across time and space to give us meaning. There are many novels that can help you see that, but Geoffrey Chaucer made it happen first.

Up next, I’m trying The Color Purple by Alice Walker. I’ve never read it before, so I’m walking into it blind. It’s been a while since I’ve done that with a book, so I’m definitely excited!