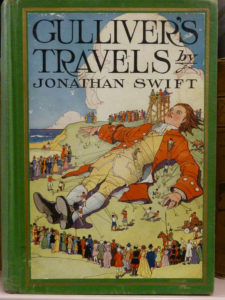 I like Gulliver’s Travels for being exactly what it is. It’s not my favorite, but I can’t help but enjoy the things that make it good. I enjoy it for the same reason I enjoy Shakespeare’s plays (and for the same reason I am currently enjoying Don Quixote, which I’ll write about soon)—the author, Jonathan Swift, takes his favorite ideas from a huge body of literature before him and makes those ideas his own in Gulliver’s Travels, which has enough flare, depth, humor, and meaning to have lasted hundreds of years.

On the surface, Gulliver’s Travels is the simple story of Lemuel Gulliver, who goes on four loosely connected adventures in his lifetime to the far reaches of the undiscovered world. He goes first to Lilliput, where he meets a nation of people mere inches tall, then to Brobdingnag where he meets a nation of giants ten times his size. His third journey involves a set of smaller adventures, notably his visit to the airborn island of Laputa. His last adventure is to the land of the Houyhnhnms, a culture of knowledgeable horses that teach him their ways. 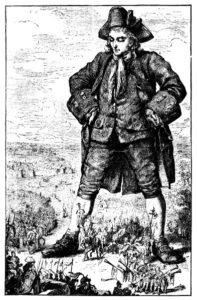 Lemuel Gulliver on the island of Lilliput.

Ask any English teacher and they’ll tell you—Gulliver’s Travels is satire at heart. It uses the surface story of a man on a series of impossible adventures to point more than a few obvious fingers at politics, society, and humanity. I usually associate Gulliver’s Travels with The Colbert Report, if only because they accomplish the same thing in very different ways. Both use humor, absurdity, and criticism to make bold statements about the world, forcing readers and viewers to use a greater degree of logic.

Gulliver’s Travels made the list because it clearly embraces the use of satire to great success, and it did so in a way never before seen in its time. This is of course debatable—several works before Gulliver’s Travels have used satire, such as any number of Shakespeare’s works and Don Quixote. But nothing seems to have left an impression like Jonathan Swift—the entirety of Gulliver’s Travels is a dark joke, and you, gentle reader, are likely the butt of it. 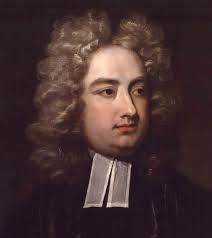 Swift at some point discovered that satire is one of the best forms of shaming people and calling for radical change while still being art. Somehow, in the reality we live in, the thoughts spoken meaningfully can get lost in the clutter of everyone speaking at once, but saying the exact opposite of what we mean while being facetious enough to get our point across makes people shut up and listen. In the meaninglessness of Swift’s fantasy worlds is where we can find meaning.

But Swift wasn’t entirely meaningless—a lot of passages, especially from his fourth adventure, are honest and sincere. As Swift’s narrator, Gulliver is more than a finger for pointed critically at society. We see these adventures take a serious toll on his life and directly affect his view of his family. In speaking with the Houyhnhnms (probably some of my favorite passages), he confronts some of the uglier parts of humanity and changes irreversibly.

And yet, for the most part, Gulliver is the kind of character that functions as a blank slate—a way for Swift to paint a picture of the world as he sees it, with the flare of fantasy for good measure. Gulliver’s flaws as a character help us see what Swift intends, and Swift intends a lot. His relentlessness towards society’s mass imperfections have enough detail to fill a history class, and yet are broad enough to apply to the flaws of several societies centuries later. Gulliver’s Travels is not my favorite, but it’s a work of genius everyone should get to know.

Up next is Don Quixote! I’m enjoying it so far and I’m excited to write about it.