So . . . I’ll just come right out and say it: Money: A Suicide Note is one of my least favorite books of all time.

To read Martin Amis’ Money is to be met with a tour de force of alcoholism, drugs, addiction, rape, sexism, homophobia, manipulation, and toxic behavior the likes of which no one should have to endure. Money is a kaleidoscopic perspective on humanity’s fast and entertaining decay, due almost entirely to the concept of money and its poisonous fumes.

I will admit, there are parts I liked, or at least appreciated. And in theory, the book is a perfect criticism of celebrity lifestyle and capitalism. Money points out our inherent cultural flaw, our need for, dependence on, addiction to money—better than most books I’ve read on the subject. I have no doubt that that’s why this novel made the list.

But the details—the characters, plot, symbols, words—made me sick. It was crass and disgusting. Maybe I would have enjoyed it more if I had known what I was getting into (before seeing the list, I had never heard of Money before, so I went in cold); after all, I’ve seen movies and read books that aim to be offensive, and the best ones, like Money, have a clear and even moral purpose, like criticizing cultural flaws. Still, I’ve never enjoyed reading a book less, and I won’t get that time back. 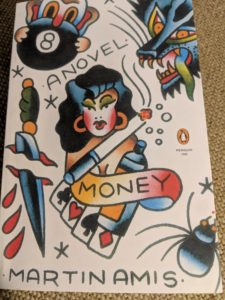 But the least I can do is tell you who these unlikable characters are, and a bit about what they do that’s so unlikable. The narrator is a man named John Self, a conceited, sadistic, out-of-control addict attempting to adapt his story into a movie. He is surrounded by celebrities that are as self-absorbed as he is, as money-addicted and as morally bankrupt too. He spends his days in constant cycles of prostitutes, alcohol, smoking, and mindless purchases, and all the while he experiences a ceaseless and vulgar inner monologue that is as carefully crafted as it is offensive.

John Self reminds me a lot of Holden Caulfield, the main character and narrator of The Catcher in the Rye. Caulfield is similarly problematic, with his intrusive and offensive thoughts filling up most of the novel; but I liked reading The Catcher in the Rye, and I know exactly why it was better. Caulfield was an angsty teenager, dealing with a lot of personal issues in the way a teenager might—lashing out at adults, behaving irrationally, refusing to face his issues head-on, etc. Even so, ultimately The Catcher in the Rye is about a search for happiness, and Holden’s care for younger children (and their untainted innocence) expresses that. Our focus on a an unlikable narrator becomes our focus on a teenager in crisis and on society’s mistreatment of children.

But Money doesn’t do that. John Self is a grown man, and spends a lot of time blaming his equally terrible father for his own mistakes, despite having the ability to change his ways. He has broad generalizations about the world and its mechanisms, and everything he says is questionable or flat-out immoral. He despises people that are different from him and he despises himself. He crosses the line from offensive to unforgivable far too often, in ways I don’t care to repeat. And unfortunately, he is on every page. 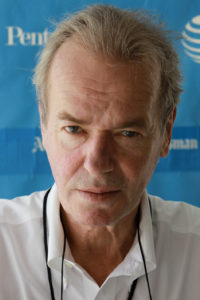 Now, there are things that I like. For instance, its clear that Martin Amis knows what he’s doing—John Self’s diatribes are despicable, but well-written. The clever word choice and puns, the perfectly captured voice of John Self, the balance of the whole story from beginning to end . . . Amis is a craftsman.

Amis also happens to write himself into his own novel—a fun meta twist that uses “character-Martin-Amis” to help show what “writer-Martin-Amis” is trying to do. He gets to poke fun at his own pretentiousness and explain his actions for creating a character like John Self—it’s his way of putting all of the poison of fame and fortune into one tragic character, destroyed inside and out by the way we live now. The episodes with “character-Martin-Amis” stood out as Money‘s most creative and intriguing moments.

And yet, for all its technical brilliance, I can’t stand the novel’s content. Money‘s plot is weak, spending more time creatively caving in on itself than telling a story, which I could live with, except that whatever story is left is detestable. The thinness of the plot is paired with disgusting scene after disgusting scene—an endless episodic bombardment of debasement and degradation. I didn’t enjoy it and I’m glad it’s over now.

With that out of the way, I can look forward to the remaining books on the 50-books-list. I can’t guarantee I’ll enjoy what stories are left, but it’s a safe bet that Money is going to remain at the top of my I-hated-this-book list for quite some time, if not forever.

Next up, I’m finishing The Way We Live Now by Anthony Trollope—a novel that, so far, I have enjoyed. That’s more than I can say for some books.