The War of the Worlds

The War of the Worlds already had a lot going for it when I picked it up—I love a good story about aliens. For all of the novel’s pitfalls, it makes up for it by being one of the earliest science fiction novels ever written, inspiring sci-fi for years to come.

The narrator details the horror of aliens attacking Earth—the Heat-Rays, the giant tripods, the freakish shapes of the creatures themselves, the death, the chaos, the destruction of towns and homes . . . it’s all portrayed as graphically as a Victorian-Era novel can be. The narrator spends most of his time trying to get back to his wife, who may be dead already, and his journey shows him the diversity of both the Martians’ attacks and the chaotic human response. 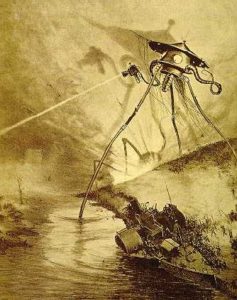 Don’t get me wrong—The War of the Worlds is a little dated. It’s well over a hundred years old, and sounds too much like Charles Dickens describing aliens and battle, which is jarring. Parts of the novel stumble over themselves, like when the narrator tells the story of what happened to his brother. Any modern writer wouldn’t bother explaining why two people are telling the story, but that’s too complicated for H. G. Wells’ audience—Wells’ is very careful in making his narrator explain the leap in the story.

And, of course, the science is more than outdated . . . it’s plain wrong. Your science lesson for today: no Martians like the ones described live on Mars. The science is beyond fringe, and the theory of intelligent life on any planet in our solar system is just shy of impossible. It’s an interesting thought, but we all know the idea of aliens on Mars is closer to fantasy than sci-fi. 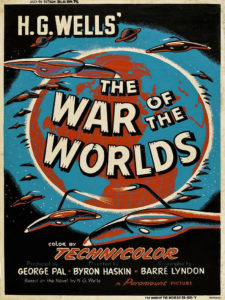 That doesn’t make The War of the Worlds bad . . . just dated. One of the strongest scenes, occurring over several chapters, involves the narrator trapped in a house with a panic-stricken man who keeps talking about the end of the world. He’s too loud, threatening to give away their position, and the narrator fights him to keep him quiet. The narrator kills him in the process. Wells isn’t just adding to the drama, here; this character’s loss of rational thought is a natural human response, and so is his murder by the narrator’s hands.

Wells is providing a pure account of the story, and letting the scientific, ethical, and horrific implications speak for themselves within each reader—leaving us only with a well-told story. All the best sci-fi/fantasy stories do this; they give us the story purely, and let us debate over scientific and moral hypotheticals. These are the kinds of stories that stand the test of time. 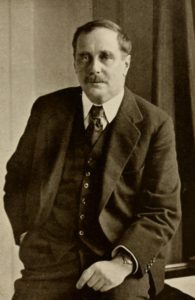 Like any good sci-fi novel, The War of the Worlds speaks through metaphors—aliens in stories are never just aliens. For Wells, a British man at the height of the British empire, the aliens are a distant unconquered people, with the power to vanquish Britsh forces. Wells is showing us that Britain’s treatment of smaller kingdoms and weaker people will come back to haunt them. The Martians treat humans as mercilessly as the British treated, for example, people of African nations.

It is a little too “white man’s burden;” the fear of the Martians can feel a little like fear of the “other-ness” of minority groups and foreign people. It’s subtle, but it’s there, and it’s worth noting how dated a philosophy it is. Even so, it seems to be a message of mercy, which is always good to read.

Next up, I’m jumping forward to Jack Kerouac’s On the Road—dropping the science fiction for a little more 1950s American grit. It’s not my cup of tea, but I’m always surprised by a good book—I’ll let you know what I find.