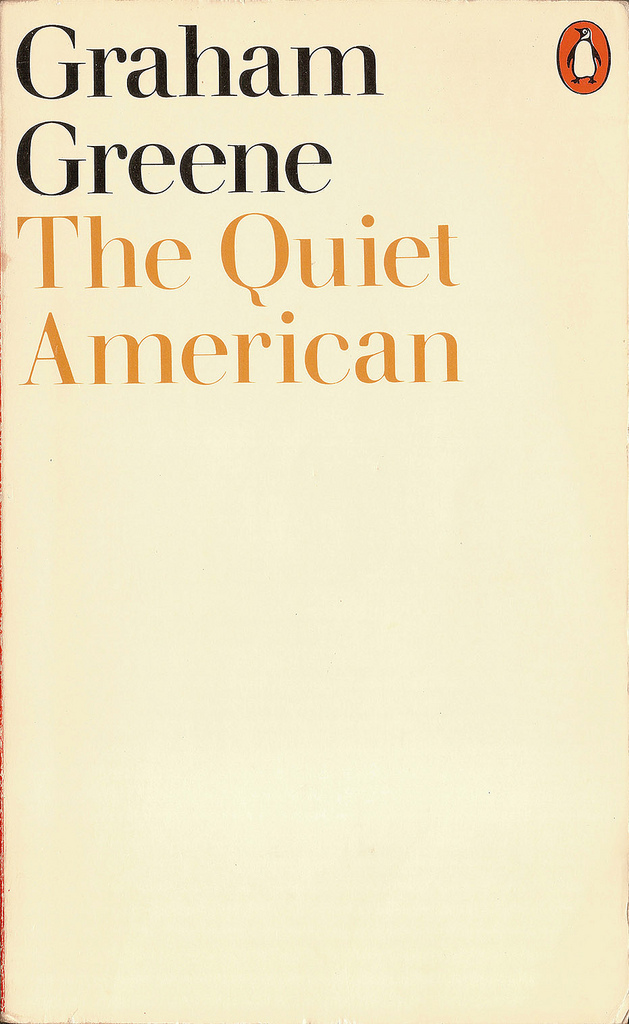 I’ve reached maximum blog power here—Graham Greene’s The Quiet American is one of the handful of books on the 50-books list that I had not only never read, but had never heard of before. This is literature obscure enough to have never even appeared before a professor like myself, with all of my years of expertise.

Greene’s protagonist, Thomas Fowler, is a British reporter stationed in Vietnam who swears not to get involved in the conflict; he’s only there to report. His friend, the “quiet American” Alden Pyle, has been murdered, and Fowler begins flashing back through their friendship. Their first meeting, their awkward love triangle with a woman named Phuong, their ideological differences . . . all popping up like a panorama of Pyle’s life against the backdrop of the Vietnam conflict.

I wouldn’t say I enjoyed it. It was too political, too subtextual, too circuitous. Happens to the best of us—I appreciated all the novel did, but simply didn’t like reading it. I’ll still dole out one heck of a lecture.

I think the primary reason it made the list is also the most infamous reason—Greene’s 1950s novel predicted the outcome of American influence in Vietnam in the 60s and 70s. This is clearest in Greene’s portrayal of Alden Pyle: Pyle is young, morally motivated, and so inspired to help that he can’t see who he hurts (ladies and gentlemen, a summary of American politics). The novel heavily criticizes American intrusion in world affairs, however good the intentions may seem.

In fact, each of Greene’s main characters represent their countries. Fowler’s refusal to “take sides,” and his failure to do so, is a representation of British transition away from colonialism. Phuong’s representation of her country is laced with racism, as a silent and objectified victim; but her name, which means phoenix, implies an inner quality of resurrection against others imposing their will, much like Vietnam itself throughout the conflict.

The political predictions are not magic—they are a reaction to the World Wars. Fowler and Pyle’s father are called “isolationists,” referring to the United States’ hesitance to enter into any world conflicts. But after America’s efforts heavily influenced world events in the country’s favor, that belief began to die out. Intrusion into countries like Vietnam were ideological wars (which is why Fowler is disgusted with “mental concepts”). Greene was playing out what would keep happening if America made decisions on behalf of the rest of the world . . . and he was very right.

Politics, however, are not the way to my heart. My love is reserved for character arcs and themes.

We spend the entire story inside Fowler’s head. We get his long-standing death wish, his inability to believe in God (or anything that isn’t physical fact), his wayward morals on sex and marriage, and his confusing relationships with Pyle and Phuong. Only a few things tip off his bias, but the major one is his racism—every time he refers to the Vietnamese with the word “they,” superiority fills the air. His subtle comparison between Phuong and Pyle’s dog says more than enough.

But there is something to be said about Fowler’s bottled-up racism—he rarely, if ever, acts on it—in contrast with Pyle’s active infringement on Phuong’s life and the lives of the Vietnamese people. It’s disguised as kindness, but Pyle does more harm than good. Fowler, who holds back the harm he can cause, can’t stand Pyle’s destructiveness. Pyle’s death is caused by his own tendency for chaos and Fowler breaking his rule by taking a side.

That’s the real character arc, and the real reason to read the story: Fowler’s attempts, and his failure, to stay disengaged. He doesn’t like causing pain, and maybe by staying out of all conflicts no pain will be caused. But Pyle is the perfect catalyst for getting Fowler involved, precisely because of how much pain Pyle causes. Fowler makes a devastating choice, leading to Pyle’s death, and Fowler falls back into the story he’s worked so hard not to be a part of.

Like I said, I didn’t like reading it. But I can appreciate it. Now that, students—sincerely and unironically—is the KEY to passing English. Write that down in your notes.

Next up, I’m reading Jane Austen’s Pride and Prejudice. I’m a tad excited; this is one of those books that I wouldn’t ever read for fun, but I know I’ll enjoy it. It comes highly recommended by very cool people.