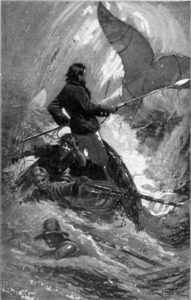 Moby-Dick is one of the novels on the list that toes the line between too difficult for someone to enjoy and important enough to power through nonetheless. Most of the novels that fall into this trap are older works, like Dante’s Inferno or Don Quixote, both a bit too old and out-of-touch to enjoy outside of a class. Moby-Dick doesn’t do that though—its place in history recent enough that it doesn’t feel out-of-touch. Herman Melville actually makes plenty of genius moves with Moby-Dick that make it special even now, doing things that most novels today wouldn’t dare to do.

But it’s also a lot like James Joyce’s Ulysses—the novel is successfully doing so much that the end result is far too complicated. Of all the books on the list it’s probably most like The Count of Monte Cristo, in several ways—notably, both are tales of revenge where fate plays a big part. Melville makes sure to tell all sides of the epic tale he dreamed up, which makes the story thorough and way too long. It never fails to be interesting, though—I’ve learned more about whales and whaling than I ever wanted, and Melville did that without compromising on a story that was impressive to begin with.

Altogether, Moby-Dick seems near perfect; it may come off as long or tedious, but there’s no denying that all the pieces are in the right place for a story worth telling. That’s more than enough reason to read it before you die. 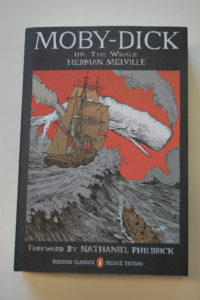 When I say I’ve learned plenty about whales, I mean it—the reason this novel is so long is because half of it is a textbook. The narrator, who calls himself Ishmael (and a questionable authority if there ever was one), spends most of his time making sure we understand exactly what our characters are facing . . . by describing any and all potentially necessary information about whales. He describes the body, behavior, history, and cultural impact of whales, along with details about whaling, oil, ocean life, the routines of the crew, and most importantly, the full description of Moby-Dick himself. As an example, one chapter is called “The Whiteness of the Whale,” which takes several pages to describe Moby-Dick’s rare white skin.

Reading Moby-Dick can be exhausting. Informative, too, but exhausting nonetheless. The monotony of the characters’ lives at sea is bleak and relentless, and the simplest action can be a reprieve from that monotony. In some chapters, nothing happens—except for a short essay on whales or whaling. These aren’t boring chapters—far from it. They are interesting and dynamic interjections, each one showing the reader something new about what’s to come or about the narrator’s mysterious inner thoughts. The takeaway is that these informative time-filler chapters—much like the book as a whole—are the essence of unconventional story-telling. 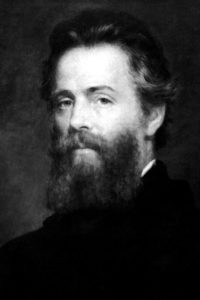 The reason to pick up Moby-Dick off the shelf can be more easily found in two characters. One we already know—the questionable narrator, Ishmael, a passing soul in the larger narrative whose great purpose is to tell the story of the hunt for Moby-Dick. He lets us know early on that the whaling voyage is doomed, and he is the sole survivor of the ruined vessel. Because of Ishmael, most of the novel relies on concepts of fate and evil that are born from tragedy—every tension is in solving how the tragedy will happen, and every calm is subdued by the knowledge that disaster will strike soon enough.

Then there’s Captain Ahab—the obsessed, unstable, majestic, terrifying leader of the crew, most culpable in the ship’s demise and the resulting death of his crew. His arc is simple enough—Moby-Dick is responsible for Ahab losing his leg, and Ahab will sail to the ends of the earth and back on his quest of revenge to kill Moby-Dick for it. Ahab has a way of jumping off the page—he’s very human, malevolent, sarcastic, emotional, and liable to snap at any moment under the weight of his own obsession. Part of Melville’s genius is in making Ahab so many things at once that it’s hard to define him—he’s as complex as any realistic character, and just as much a legend as any character in the ancient epics of human history.

That being said, it’s just as hard to pin down what the novel really is, too. It isn’t a warning about obsession or revenge, though that seems to be an important idea. It’s definitely an epic, but it’s not a myth about an ancient legend—it’s about a whaling vessel, blown into epic proportions without losing an ounce of its careful realism (which is lacking in the myths of old). It’s not really an adventure story, though there’s adventure in it—along with too much foreboding and doom. More than a few chapters feature dramatizations or monologues, as though Melville is imitating Shakespeare. Parts of it even belong to comedy, or at least some kind of absurdism, such as it is—though it’s a bit hard to laugh knowing how it all ends.

One thing’s for sure: Moby-Dick is special. I know it’s not everyone’s cup of tea, so I do question its inclusion on the list, but there’s something special enough about it that everyone should at least consider reading it. It’s not just one of those important works of art—it’s a good and thoughtful story. Sometimes that’s all you need.

Next up, I’m finishing up Sebastian Faulks’ novel Birdsong—yet another I’d never heard of before starting the blog. More on that next time.