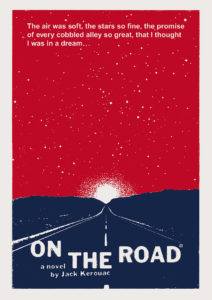 Jack Kerouac’s On the Road fits nicely between two other novels I’ve read for this blog: The Grapes of Wrath and The Catcher in the Rye. Kerouac’s novel has the same nonconformist, rebellious attitude as The Catcher in the Rye (with a little less teen angst), but Catcher is all in the narrator’s head. Though just like The Grapes of Wrath, On the Road has the sense of a sweeping American portrait. For its 1950s setting, it describes the entire country poetically and perceptively, which is why it makes the list.

But as good a reason as that is, I wouldn’t say On the Road was worth my time—and that’s entirely because of the story and the characters. The narrator, Sal, develops a friendship with a man named Dean Moriarty, and the story is about the many cross-country road trips they make with each other. They rarely have enough money, which never bothers them, and they find ways to enjoy the chaos of living on the open road—speeding recklessly across the landscape, sleeping around, drinking, and finding money where they can.

These two characters, with their rotating roster of friends and lovers, are always crossing the country or waiting until they can cross the country again. They can’t seem to stay in any place for long. My theory is that they are looking for happiness—something they’ve never had with the people in their lives or the jobs they’ve settled for. What they do along the way in their search doesn’t matter to them, because they aren’t happy . . . which means they can break the law, dispose of people in their lives like trash, and succumb to whatever they feel like doing at any moment. 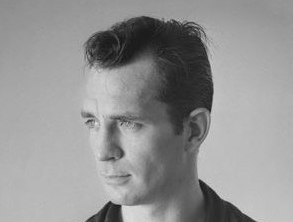 There is an appeal to their lives—they can abandon anything that ties them down, and hit the open road with more energy than anyone else. There is something impressive about their ability to relinquish everything. This is Kerouac’s connection to the Beat generation of literature—a group of artists after WWII who celebrated the beaten-down-ness and the beauty of their lives. This group found interesting ways to challenge social norms while creating new methods of art, and On the Road is one of the most powerful novels that sum up the Beat generation of artists.

But the idea of abandonment is taken too far, at least for me, by the way the characters treat others. Sal and Dean just as easily abandon the rules of kindness, and their recklessness never fails to hurt others. Their sexism and homophobia also get under my skin, even if it fits with both their lifestyle of abandonment and American society of the time. They are powerful characters, but they are incredibly unlikable.

Still, On the Road always comes back to what makes it special: a poetic voice that captures America. The road trips show off the variety of American landscapes and people—the frontier of the West, the wilderness of the East, the oppressive humidity of the behind-the-times South, the jungle of Los Angeles and the cloudy closeness of New York . . . it’s all remarkable through Sal’s eyes. I can’t to justice to Kerouac’s language, so that you’ll have to read yourself.

Up next is a novel I’ve been reading for a while, alongside the last several books I’ve posted about. I’ll probably need more than a blog post to write about James Joyce’s Ulysses, but I’ll try to keep it short! But it’s one of my favorite novels of all time, and I can hardly wait to tell you why you should read it.