The Curious Incident of the Dog in the Night-Time

With the exception of the final few Harry Potter book installments, The Curious Incident of the Dog in the Night-Time is the youngest book on the 50-books list, published in 2003. For me, it carried a stigma before I even began reading it—contemporary works are supposed to have a freshness about them, like they’re a new take on what’s been written before. When a novel like this is compared with The Lord of the Rings, Ulysses, and even the Bible, it has expectations to meet.

Meet them it did.

The Children’s Edition of the novel

Let’s not talk about plot yet. Let’s talk about how the first chapter is chapter two—every chapter afterwards is a prime number: 2, 3, 5, 7, 11, etc. Our main character, Christopher Boone, likes prime numbers, and how they explain the nature of life: like someone has taken all the patterns away, so that you could never figure out the rules.

Like I wrote last week, it is heavily suggested that Christopher has autism, which explains the interesting way he sees the world. It means that his brain limits his ability for social interaction, and that metaphors and abstract concepts usually mean nothing to him. Christopher is also incredibly smart, and the way he tells his story never ceases to prove that.

Author Mark Haddon writes Christopher’s voice matter-of-factly, so that all scenes sound the same. One scene may be Christopher enjoying a math problem, and the next may be Christopher trapped in public, surrounded by strangers that terrify him, with his pocket knife ready in his hand in case anyone touches him. It all sounds the same—Christopher struggles so much with empathy that Haddon forces us do the emotional heavy lifting. 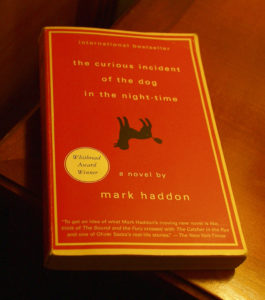 The Original/Adult Edition of the novel

And then there’s the plot. The neighbor’s dog has been murdered—stabbed with a garden fork. Christopher loves dogs because he doesn’t have to figure them out (not like people). So when the dog is killed, Christopher decides—just like his favorite detective, Sherlock Holmes, would do—that he’s going to solve the mystery of who killed it.

His single father doesn’t care for this plan at all, so Christopher has to do his detective work in secret. Of course, he causes far too much mayhem, but the plot thickens with every passing discovery. And like any good mystery (and any good story, for that matter), it’s full of surprising twists, powerful character drama, and a sense of humor.

Haddon has said that this is a story more about difference than disability. Christopher’s view of the world helps with that . . . he sees people in ways others wouldn’t. We get to see his judgement of others on his journey, as well as others’ judgement of him. Similar to novels like The Catcher in the Rye and Ulysses, the characters start looking like cells in a body, each with their own roles and reactions, colliding every now and then for some good and honest tension. And because each character is fleshed out so well, The Curious Incident made it’s way on to the 50-books list.

Up next, I’m diving back into the past with Robinson Crusoe. The promising adventure story has a lot to live up to . . . I’ll let you know how it goes.