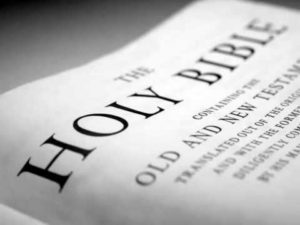 Today’s lesson is pretty serious—the Bible is arguably the most important text in human history, so I’ll begin with a kind of disclaimer:

Just like with Hamlet last week, I can’t possibly talk about everything that the Bible entails. Even worse, I can’t actually state a fact on the Bible without saying something potentially offensive. Everyone has their own experience with religion, some more positive than others, and even having the Bible on the “50 Books to Read Before You Die” list is debatable. There are people who hate it, people who are inspired by it, people who avoid it entirely, and people who use, misuse, and abuse it everyday.

With that in mind, I have two goals. 1) I’m going to talk about how the Bible has impacted me and my life (without bearing too much of my soul), and 2) I’m going to explain why I think you should read the Bible before you die. My hope is that I portray the Bible with not-too-much bias, and that you, students, are able to read this post with an open mind.

When I set out to read the Bible in its entirety, it was to improve my knowledge of the religious beliefs I had been practicing my entire life. I was in my senior year of high school when I started, and I read small sections of the Bible everyday throughout college. It was often difficult to continue, but I accomplished the task and am very glad that I did.

…But the Bible can be profoundly boring and profoundly outdated. Not only are the lists of names, endless instructions, and intricate details for tabernacles tedious…these are often followed by passages that forbid women to speak in church, condemn homosexuality, and encourage slavery, murder, and war. These passages make a significant portion of the Bible difficult to read. 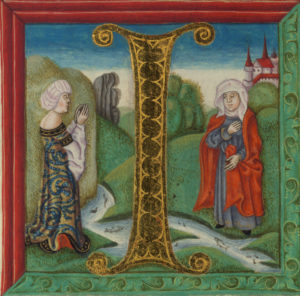 An illustration of Naomi and Ruth, from the Book of Ruth (Old Testament)

For me, these passages are admissible because of historical and cultural context. It’s certainly worth mentioning that the Bible is the oldest text on the 50-books list—it’s a collection of documents passed down orally, eventually written down, and translated multiple times over the course of thousands of years. Add to this that the authors were men in hugely male-dominated societies, and you should arrive at one obvious conclusion: the Bible is flawed.

The Bible is also incredibly beautiful. It doesn’t take a belief in God to see that many of the Psalms are moving works of poetry, or that Jesus’ parables are deep and layered metaphors. I really enjoyed reading and rereading these moments, where religion joined song and meaning. I am an English major, after all.

But the moments I enjoyed most were specifically for religious reasons—mostly, the passages that refer to love. My ideas of love come from the Bible, because most of the books I’ve read involve the kind of love that comes from the Bible (such as the Harry Potter series, which is more about love than anything else). Love that is powerful, sweeping, gentle, emotional, forgiving, and never-ending…it’s found in some of my favorite Bible passages.

As I studied each passage, I flinched at the offensive moments, almost nodded off at the boring moments, and happily praised the beautiful moments. As a practicing, active Christian, it means a lot to me that I don’t actively practice every instruction or belief in the Bible. It also means a lot to me that Biblical interpretations mean just as much to me as the text itself—it is a translation, after all, and I don’t mean to learn Hebrew any time soon. 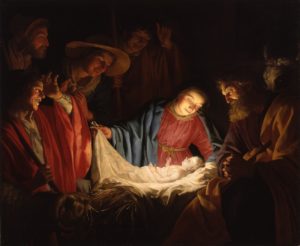 I view the Bible as a complicated guide for living life. It is helpful, even with its prejudices, when it is read for spiritual growth or information. When it’s used as a tool for power or manipulation, it can easily become abusive, and this happens daily. My beliefs aren’t too complicated here—when I think of evil, I don’t think of a horned devil or a fiery hell; I think of the capacity for evil within human beings. I think evil is hatred and segregation. People who use the Bible to oppress or suppress others are falling prey to their own evil capacity. Parts of the Bible fall into this category—I use these passages for information (i.e., to understand the culture of the time), but these passages have very little, or nothing at all, to do with my religious practice.

On the other hand, the Bible is also worth looking at simply because it’s referenced in every book on the 50-books list. Even the ones I haven’t read yet—I’m willing to bet they each use it as inspiration. In the history of English literature, nothing has made a bigger impact than the Bible. Looking more closely at the Bible has its own benefits, but it’s also the key to understanding some of the greatest literary masterpieces from the past thousand years. 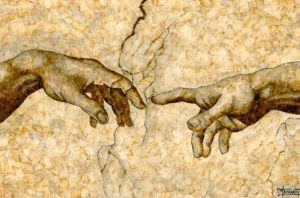 A close up of Michelangelo’s painting on the Sistine Chapel

But for me, it’s about the journey of love. Connection, family, honesty, communion, trust, forgiveness, communication, acceptance, sacrifice, faith, pain…it’s all love in different ways. That’s the “point” of the Bible.

I’ve already started reading my next novel: The Catcher in the Rye. It actually has a lot in common with Hamlet, with the focus on a vengeful, misguided youth, so it seemed like a logical leap—granted, it’s a leap forward hundreds of years and across the Atlantic…

More on that next week!

50 Books to Read Before You DieBibleChristianityEvilHistoryLiteratureLoveReligion