The Outsiders reminds me a little of The Catcher in the Rye. Both are told from the angst-y teenage minds of mid-20th Century boys, and both support much more realistic depictions of teenage life than most novels ever have, then or since. But there are two simple differences between them: 1) Salinger wrote Catcher for adults, while S. E. Hinton wrote The Outsiders for teenagers; and 2) Hinton was a teenager when she wrote it. 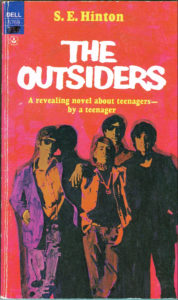 So this book—of teenagers, by a teenager, and for teenagers—was one of the first of its kind, and remains the embodiment of young adult literature even today. It clearly should be on the list.

The story of the gang war between the Greasers and the Socs is by now a classic. Ponyboy Curtis, our protagonist, is young, clever, misguided, and heroic, and he lives with his two brothers on the Greaser side of the war. After Ponyboy and his friend Johnny murder a member of the Socs in self-defense, they go on the run, upsetting the dynamic of both gangs and the war between them.

But more important than the story and even the colorful characters is the spark that started the novel. S. E. Hinton was unimpressed by the stories written for teenagers of her day—she found nothing but stories about mindless high school drama and cheesy romantic relationships, none of which reflected her own experiences. She did what any creative person would do—she wrote her own novel to fill in the gaps. The result was a competent story that changed the game for teenage fiction. 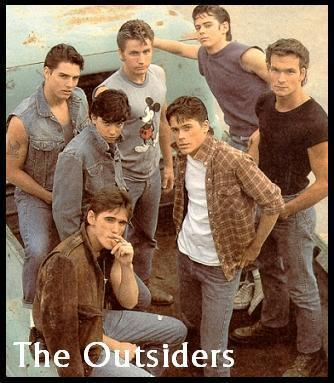 Image from the movie adaptation, The Outsiders (1983)

The Outsiders was controversial, and still is. No one wanted their children or their students reading about gang violence, and as a result, the novel has appeared on lists of banned books for decades. You all know by this point that I believe no book deserves to be banned, though it’s particularly strange that this book ever belonged to that category—the violence featured is tame, and it isn’t even the point of the story. Hinton’s intentions were about realism; she wanted people her age to read a novel and see themselves reflected in the characters. The Outsiders was meant to connect with young readers, who want a story that doesn’t patronize and actually means something.

I don’t imagine much of the young adult genre would exist today without The Outsiders. The controversy probably helped make it more famous, and the power of the work itself helped keep it there, but its value extends beyond itself. Without The Outsiders, there’s no Harry Potter Series, no Hunger Games Trilogy, Giver Series . . . and the list goes on. For that, The Outsiders deserves recognition. For being a good story, it deserves a spot on the list.

I’m still finishing up The Amber Spyglass, the third novel in the His Dark Materials Trilogy—another series that wouldn’t have made it in the young adult genre without The Outsiders paving the way first. It also happens to be one of the more controversial book series in the entire genre, and for much better reasons than The Outsiders was.

We’ll discuss it more next class!