I didn’t expect to write about Cloud Atlas because I didn’t think I’d have the chance to read it, while focusing on the books from the 50-books list. But I gave it a shot, and it absolutely belongs here. I know why it didn’t make the list, but I also know that it 100% should have.

Cloud Atlas is a rare book. Author David Mitchell wrote 6 interconnecting stories in a unique and cohesive format—each story is in a different time period with vastly different characters and even different writing styles, but mostly similar themes. The stories never completely converge . . . one story may bleed into the next or reference another in the past or the future, but they are separate stories. 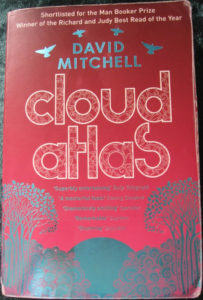 The first story is from the perspective of the attorney Adam Ewing on a Pacific ship in the 1800s, writing his experiences in his journal. The journal stops midway and picks up with an entirely new character, Robert Frobisher, a young composer in the 1930s working with a crippled aging composer as a sort of apprentice. Frobisher writes letters to his distant lover—both his letters and his lover are plot devices in the third story, a 70s mystery novel focusing on the stouthearted journalist Luisa Rey, who attempts to get to the bottom of a corporate conspiracy.

Then, in present day, we focus on a spirited and manipulative publisher, Timothy Cavendish, hilariously finding himself trapped in an elderly care facility by a sadistic nurse. Then we jump forward into the future, where Neo-Seoul is run by something called the Corpocracy; the hero is a clone, Sonmi-451, who begins to understand her own humanity and is kidnapped in her failed revolution, and before her execution she is given a final interview to explain the complicated details of her life. Last but not least, in the far away future after what seems like an apocalyptic event, a fearful and flawed man named Zachry, simply trying to get by in a hard-enough life, struggles to deal with a band of cannibals, a tech-savvy foreigner who he may have feelings for, and a prophecy that threatens to unbalance his life. 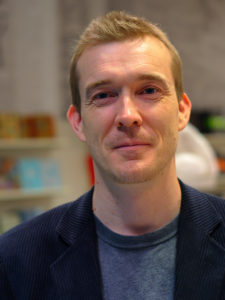 But that’s only the first half of the novel—from the final story, the novel begins to work backwards, revisiting the second half of each story in reverse order. Each story has some importance to the overall arc of the novel, but Mitchell makes it clear that they are important individually, too. The ordeal of Timothy Cavendish is comic genius, while the Pacific journal is a Victorian masterpiece, ringing with Moby-Dick vibes. The Luisa Rey mystery is a perfectly cheesy hard-boiled thriller, and the broken language of Zachry’s world after “The Fall” perfectly grasps the sense of long-lost humanity and our tragic downfall as a species. Each story is good, and all combined, the one shared story is even better.

For all their differences, there are things beyond continuity that keep the stories together, and finding those things is kind of like solving a puzzle. Every story seems to have a mention about cannibals, for instance—from the actual cannibals in the far off future to Timothy Cavendish mockingly shouting at his fellow inmates at the elderly home, “Soylent Green is people!” (in reference to the 1970s movie Soylent Green, for the unobservant of you). Overall, the theme of cannibalism—the literal or metaphorical feeding off others—seems to be Mitchell’s commentary on human hunger, the inner animal with an insatiable appetite that threatens humanity’s existence. It’s a small piece of the puzzle, but an important one.

Other themes pop up consistently as well, if you have enough patience to make the connections—it’s got so many layers that I’m sure it welcomes rereading. And the goal seems to be one overall story about a soul, reincarnated again and again throughout time. The reader gets to see the story of the same soul in several different lives, moving across the centuries the same way clouds move above us, changing shape and color but staying still inherently clouds . . . hence the name Cloud Atlas—a mapping out of the life of a soul, moving like the clouds across the sky. 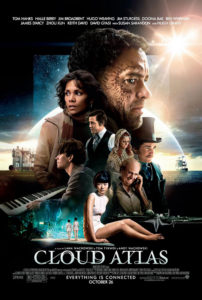 Poster from the movie adaptation of Cloud Atlas (2012)

I know why it didn’t make the list—as good as each single story is, they’re still each performing at one-sixths capacity. Mitchell didn’t devote all his time to Ewing’s journal, just a fraction of it, so there’s no way it matches the feat that Moby-Dick achieved, over a hundred years later (blog post pending). The same can be said of his futuristic stories, creative as they are, which still come off as straightforward reflections of other stronger works like Brave New World. Mitchell’s genius may be overpowered by the weight of the story he’s telling, and even though it’s impressive and rare, that’s mostly so because Mitchell is one author rather than six.

But that’s not good enough for me. It should be on the list anyway. The six wildly different stories are still interrelated enough to make something new—something that is distinctly Cloud-Atlas-y, not a collection of cheap duplicates but something made greater in the fusion of powerful stories in their own right. This is an epic—an overarching story of humanity’s past and future, where we follow a soul’s path through time. It’s an amazing, incredible tale that everyone should read.

Still working on Huckleberry Finn, up next time. I don’t know how I’ll feel when I sit down to write about it, but I can tell you I liked Cloud Atlas better. We’ll see how that goes I guess.