“This portrait would be to him the most magical of mirrors.  As it had revealed to him his own body, so it would reveal to him his own soul.  And when winter came upon it, he would would still be standing where spring trembles on the verge of summer.  When the blood crept from its face, and left behind a pallid mask of chalk with leaden eyes, he would keep the glamour of boyhood.  Not one blossom of his loveliness would ever fade.  Not one pulse of his life would ever weaken.  Like the gods of the Greeks, he would be strong, and fleet, and joyous.  What did it matter what happened to the coloured image on the canvas?  He would be safe.  That was everything.”

–from The Picture of Dorian Gray by Oscar Wilde

The Lord of the Rings

Welcome, students. I’ve finally finished reading all 1,000+ pages of The Lord of the Rings.

I am biased, in a way: I grew up watching The Lord of the Rings as movies, so I knew the story almost by heart by the time I sat down with the original material.  But there is so much that separates the original from the movies, not only in the medium, but in the mood and development of the story too.  It not only looks different; it feels different.

The trilogy has its problems, but it is outmatched by what Tolkien does right.  For example, Middle-Earth is astounding–the hobbits of the Shire, the mystical Elven-land of Rivendell, the forests of Lothlórien and Fangorn, the vast kingdom of the horse-land Rohan, the glorious realm of Gondor helmed by the white towers of Minas Tirith, and the dark and fiery Mordor.  Its scope is matched with depth; Tolkien creates dynamic cultures from the ground up, founded on his beautifully invented languages. 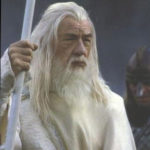 Tolkien’s characters are wonderful, and I’ve got three favorites–Gandalf, Gollum, and Sam.  Gandalf, a wizard, is the voice of wisdom; he is the story’s mind and moral compass.  Gandalf fights evil in many ways, but his chief method is through acts of love, and through the comfort of believing in the smaller things that tip the scales in times of war.  He is, quite possibly, the most quotable character. 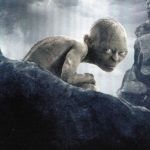 Gollum is much more interesting to study–he has been torn apart by the dark magic of the One Ring, and the pieces of himself fight with each other.  He calls the ring “my precious,” an excellent metaphor for materialism and what it does to the soul.  He is the smallest of enemies, but he is dynamic, pitiable, terrifying, and integral to the quest of our characters. 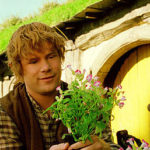 And then there’s Sam.  Samwise Gamgee is the heart of the story, and easily the most cherished character.  He is Frodo’s servant and friend, and as Frodo dutifully bears the ring, Sam bears his master Frodo.  Amidst the terrifying obstacles they face, Sam is incredibly brave, refreshingly hopeful, and unquestionably hilarious.  He is also directly involved in every tearjerker moment, in both the books and the movies, and while the cost of their quest is greatest on Frodo, Sam’s place helps ground that cost back in the real world–in the hope that after such a journey, such a treasure as home can be regained.

The trilogy has flaws.  The most glaring issue is the fact that it has, approximately, four female characters.  Two of them are forgettable, one is an Elven queen (angelic beyond compare, so impossible to connect to), and the last is a warrior, who eventually gives up fighting for her kingdom when she finds true love.  Feminism does not abound here.

On a personal note, Tolkien also suffers when it comes to exposition.  The movies notably tighten the story, but the novel lags on in huge passages where Tolkien is simply trying to catch up with his characters’ tales, and it forces the reader to trudge through the narrative.  The story seems to date itself when it handles conspiracy and secrecy, but because I know the movies so well, it could just be that the big reveals didn’t feel like much. 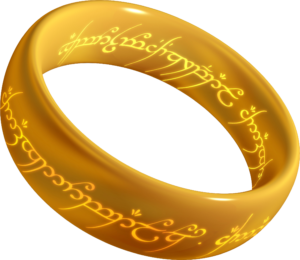 These issues aside, the depth of the world and the everlasting themes are the reason to read The Lord of the Rings.  Environmentalism has its say on more than one occasion, most notably when the trees of Fangorn fight back against Saruman’s machine-like destruction of the forests.  The ring’s dark power is temptation–characters succumb to pride, vengeance, greed, and selfishness, which speaks to the power of things and the frailty of humankind.  Tales and songs act as meta-fiction, showing us that this is a great story as we read it–this is a kind of song, an epic journey for the ages, that helps us appreciate the stories we know and the stories we’re in.

Most importantly, we see a sprawling war hinge on the actions of a hobbit, the smallest of creatures in Middle-Earth, who has a greater strength than men twice his size: an inner strength, which is more powerful than an army of monsters.  Through the small things–acts of love and kindness, trust, bearing our everyday burdens–we can change the course of the future.

My reading of The Lord of the Rings is unconventional–the movies helped me understand the book.  I’d like to hear from others who just so happened to experience the opposite.

Your homework: if you read the story BEFORE watching the movies, take a minute to comment on what that experience was like!  Was Tolkien’s work difficult to read without the assistance of the movies?  Were you more critical of the movie adaptations than most?  What did you think of Tolkien’s writing–not just the plot and the characters, but also his voice, style, exposition?  Leave a comment below!  (And I don’t want to be blatant, but the more thorough your answers are, the better your grade will be.  I’m just saying.)

Up next, I’m reading the remarkably short novel The Picture of Dorian Gray by Oscar Wilde.  I’m very excited about this–I’m a fan of Irish literature, but I’ve never read any of Wilde’s work.  All I know about Dorian Gray so far is his portrayal in the graphic-novel-based movie The League of Extraordinary Gentlemen…so, basically, I know his name is Dorian Gray.

Hopefully, I’ll know more next week.  See you then.

I’m still powering through The Lord of the Rings.  I’m about halfway finished, and I am hoping I’ll be done before our next class.  Await my forthcoming epic lecture.

Instead, I’m dedicating class today to the Harry Potter series. Why, the bolder of you may ask?  There are a handful of reasons.  Firstly, I’m not rereading Harry Potter–I’m only writing about it here.  I’ve read each book at least three times, so I feel I’ve earned the right to call myself an expert on the series (and no, you can’t call yourself an expert if you’ve ONLY seen the movies…there’s no call for that kind of nonsense in my classroom).

Secondly, I was inspired once I realized that Harry Potter and The Lord of the Rings are basically the same story: an unlikely protagonist becomes a key fighter in a vast magical war, accompanied by close friends who, together, face death, betrayal, and dark magic in a fantastically epic world (created by the genius mind of a British author known by strikingly vague initials rather than a first name).

And thirdly, I’m interested in harkening back to a time before Harry Potter was LITERALLY THE COOLEST THING EVER.  This series may have one of the strongest fandoms in the world, but like any fandom, it earned its popularity.  Did you know that there are people who are not a part of the Harry Potter fan community?  I assume they are simply overwhelmed by the ridiculous in-your-face-ness of said fan community’s enthusiasm.  Let’s face it–we’re a crazy group.

But someone needs to save the pour souls that seem to avoid this fantastic Wizarding World like the plague.  Someone needs to let them know that in the beginning, Harry Potter was simply about an orphan trapped under the stairs.

When readers meet Harry, he is a child bullied by his aunt, uncle, and obnoxiously spoiled cousin.  I imagine J.K. Rowling writing to a very specific reader–a child in a scary, uninviting world.  Then arrives his letter of acceptance to Hogwarts School of Witchcraft and Wizardry, and an adventure begins.

I, personally, have waited for my Hogwarts acceptance letter for about 15 years.  But it’s okay, because my dreams of going to Hogwarts came alive through seven novels and eight movie adaptations following Harry on his journey.  The Harry Potter books are one of the defining moments in my childhood, and this is the case for many other readers as well.  This series was our hope of escaping a world we were afraid of.

Once the series springs from this foundation, it soars into one of the most innovative fantasy worlds ever created.  Magical spells next to beautifully written characters; wizarding politics and wizarding sports; a boarding-school castle with more secrets than a child could dream of; a brooding and dynamic villain in a complex wizarding war; and through it all, a mostly unbiased boy-wizard hero with a courageous heart and a sometimes-simple head.  It’s the adventure of a lifetime.

Don’t get me wrong–if Harry Potter isn’t your taste, don’t waste your time.  There are tons of books to read.  Don’t limit yourself to what’s most popular.  But I would be letting you down as my students if I didn’t educate you on why it is so important.  Besides everything listed above, here is the gist: it’s important because it meaningfully discusses and challenges topics like ethics, death, friendship, education, love, coming-of-age, hope, and magic, all in a kid-friendly, not-condescending way.  Not a lot of authors can do that with as much gusto as Rowling put forth.

I’ll definitely be including quotes from the novels in the coming week.  Some of you may have noticed that I’ve included a few quotes on my blog–extra credit is reserved for those who come in on Mondays and Fridays, not just Wednesdays.  You’re not required to come to class on those days, but if you do, you’ll be letting me know how much fun my class is.  And I know some of you are having fun!

As an added assignment (NOT extra credit…this is the regular credit), I’d like to hear from you.  Harry Potter means a lot to me, and I’m sure it means a lot to you and your classmates.  Leave a comment about what Harry Potter means to you, or has meant to you in the past.  If the importance of the Harry Potter series is partly found in the meaningfulness it has in the lives of its fans, then it would be a disservice to leave out your own story.

Enjoy your week, and I look forward to hearing from you.